No matter how many books we read or films we watch, the essence of French chic is just so difficult to grasp. French women possess this unique je ne sais quoi charm which simply cannot be put into words, but it is this very elusive quality that defines French women, who are associated with refined taste, mysteriousness and fleeting beauty.

The muse of this article is the 46-year-old Caroline de Maigret, a Parisian born and bred and one of the most stylish women alive today. Like many creative types, Caroline has versatile talents and interests. She is the muse of Chanel, the face of Lancôme, music producer, author and ambassador to the non-governmental organisation CARe, where her work is focused on delivering education to women worldwide.

What better person to take advice from than Caroline when it comes to style, freedom, balance and having a healthy relationship with your own looks. And let’s not forget her mantra: “Perfection does not exist, so just give in.” It seems that this is exactly where true beauty begins.

“A tuxedo jacket with jeans and a white T-shirt – are the everyday essentials that every woman must own.”
— British Vogue, 2015

“I can’t recommend it [low cut jacket] enough, it simply looks stunning: the neckline is low but not at all vulgar. There is a glimpse of the shoulder, leaving room for imagination, while the look remains positively formal the entire time. Rather than exposing, this kind of outfit covers you up. It makes you feel like you are keeping your beauty to yourself rather than sharing it left, right and centre.”
— British Vogue, 2015

“I think it is a very Parisian thing to do – to wear the same outfit all day long and in the evening. You just need to accessorise right to make your outfit more special. I would typically swap my trainers for a pair of high heels and would feel exactly the same. I might also add some eyeliner on occasion.”
— Blue Illusion, 2016

“Don’t mix more than two colours together [in an outfit]. We prefer monochrome colours and a balance between denim, white, navy and earthy tones… This is so very Parisian.”
— Blue Illusion, 2016

“I think mysteriousness is the sexiest thing. It is also something that can be controlled.”
— British Vogue, 2015

On the Parisian in her

“Some people seem to put their fantasy of 'the ideal woman' onto the Parisian woman, while the Parisian woman doesn't have an ideal. Maybe the key is to let go and be ok with who you are rather than fantasising about perfection. You can't be perfect. You will only end up always frustrated in life. I have a big nose and that's ok. As long as I'm ok with it, people won't see it as a bad thing. I'll balance it with more eye make-up! Play with who you are. I like that about Parisian women.”
— Vogue UK, 2014

On fashion and style

“Fashion is all about bringing more lightness, fun and pleasure into life.”
— Blue Illusion, 2016

“I am not worried about messing things up. I have learnt to love and accept my choices and it is not a problem if they don’t work. I think accepting your own choices is a true superpower in life.”
— Forbes, 2019

“Skin is really important. You'll notice that Parisian women don't wear so much foundation but we do protect our skin a lot. A lot of creams, serums, eye creams. I think in France, skincare is one of the luxuries where women close their eyes to the price. I have always felt that my skin is the most important fabric - it's for life! I use SPF even in winter. On weekends I’d put a mask on my face to eliminate all traces of Parisian air pollution.”
— The Telegraph, 2015

“Never go to bed without taking your makeup off in an attempt to sleep the party off. Yes, you might be a bit more tired by the time you get in bed but this is a price worth paying for the sake of good skin.”
— Independent.ie, 2014

“Don’t use a hair dryer (really, just throw it away) and opt for these two ecologically sustainable alternatives: fresh air in summer and a towel in winter. Try and wash your hair in the evening rather than in the morning, so that you never have to leave the house with damp hair.”
— Independent.ie, 2014

“French manicure is something of a mystery: it is the complete opposite of French chic. A Parisian woman cannot comprehend it and would never go for it.”
— Independent.ie, 2014

“Whenever I spend time with my son, I try to be a 100% there for him. I turn my phone off and enjoy spending the best time with him. It is what truly matters. I try and lead quite a private personal life, even if I seem active on social media.”
— Forbes, 2019 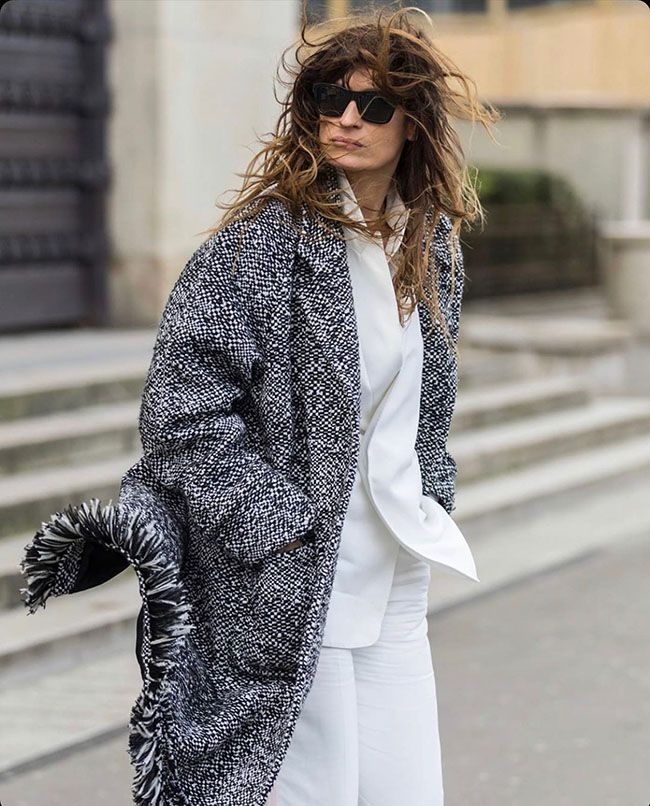 “I share my clothes with my man [Yarol Poupaud] who plays guitar. His white T-shirts are slightly worn out where they come into contact with his guitar. It makes them more stylish, you need to know how to take advantage of things like that that others won’t even think about. Your boyfriend’s wardrobe is a treasure trove.”
— Do It In Paris, 2017

On having a healthy balance

“If you are someone who can enjoy themselves without feeling guilty, everything is exactly how it should be. It means that when I go to a really nice restaurant, I get everything I want but I know that the next day I will have a salad. I just try to balance it out. It is all about balance. You can balance pleasure and look after yourself.”
— DORÉ, 2015

“One of my passions is music. I love rock-n-roll. I love going to gigs and listening to music. I love Led Zeppelin, Delta Blues. I like heavy music. Whenever I feel down, I listen to the music I love and it makes me feel better. It is my medicine. I like to walk the streets of Paris, listening to loud music which makes me feel alive.”
— Forbes, 2019

“I have had a fringe for around ten years now. I really like it, it’s cute. First of all, I think I have quite a big face, so the fringe kind of balances it out…and hides my wrinkles. Where some women might have Botox, I just use the fringe!”
— Into The Gloss, 2012

“If you start injecting, it can change you… I think it makes them [the people who do Botox injections] look older. The fuller your life is of meetings with friends, time spent reading and watching films, the less you think about your face.”
— DORÉ, 2015

On making the right impressions

“Part of a French woman’s charm is to not make it look like she’s spent too much time getting ready. She wants you to think that she has better things to do, even if she spends as much time on self-care as everyone else. We don’t ready more books, we just pretend. I am not going to spend an hour drying my hair with a hair dryer, because I have more important things to do. I think that a French woman wants to be loved for her personality, rather than for her cleavage or good looks. She wants to look beautiful and for others to think the same. But by the end of the dinner what she wants to hear is ‘Wow, that was such a great conversation, it was so much fun’, rather than ‘She’s good looking’.”
— Harper’s Bazaar, 2017

previous article
For the love of veg: teaching children to eat their greens
next article
How to fall in love with cold temperatures
Related Posts